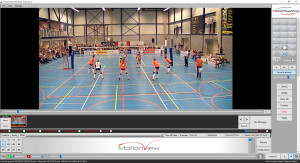 Eredivisie volleyball club Taurus at Houten in the Netherlands has two Axis PTZ cameras now being a year in operation. The satisfaction is great. The two cameras can even be used for  broadcasting over the web. Several of their games could be viewed over the internet. The competition analysis can now be performed simultaneously with two cameras. From the MotionView software, these cameras can be controlled directly. A very nice tool in the gym that is located there for permanent disposal.

This site uses Akismet to reduce spam. Learn how your comment data is processed.